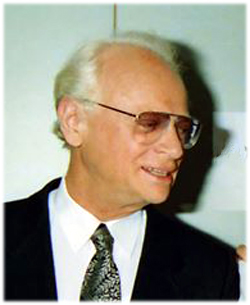 Ephraim Kishon, (August 23, 1924 – January 29, 2005)
was an Hungarian born, Israeli writer, satirist, dramatist, screenwriter, and film director. He spent most of his youth in labour camps and in various hiding-places in fear of the Nazis. In 1944, Kishon was deported to Jolsva, a labour camp in Slovakia but together with a friend he managed to escape. In the camp he worked as a secretary for the district commandant. He got his job only because of the fact that he was an excellent chess player and the Nazi commander wanted to play with him [2].

Kishon was a life-long chess enthusiast, and took an early interest in chess-playing computers. In 1990, German chess computer manufacturer Hegener & Glaser along with its affiliate at that time, Fidelity Electronics [3], produced the Kishon Chesster [4], a dedicated chess computer with a program by Dan and Kathe Spracklen, distinguished by the spoken comments of Kishon [5].