Difference between revisions of "Ed Schroder" 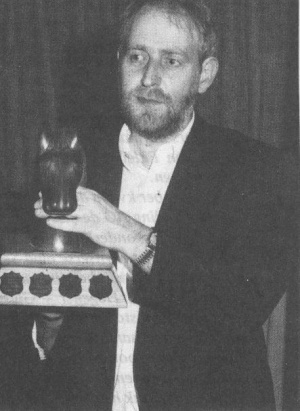 Ed Schröder, (Ed Schroder)
a Dutch computer chess programmer and founder of Schröder BV [2], a chess software developing company. Ed is author of various chess programs for PCs as well for dedicated chess computers. His most famous chess programs were the commercial programs Rebel [3], and based on Rebel the WMCCC 1991 Micro Champion Gideon [4], the World Computer Chess Champion from the WCCC 1992, ChessMachine [5], and the free program ProDeo [6] [7]. Ed contributed a lot to computer chess, since he made almost all his knowledge about chess programming public, when he retired from competition in 2003 [8]. In 2002 Lokasoft took over the activities of Schröder BV [9].

In 2011, Ed Schröder first signed the open letter directed to the ICGA, to support the claim Rybka 1.0 beta and subsequent versions were allegedly derivatives from Fabien Letouzey’s program Fruit 2.1, but soon after the ICGA decision, reconsidered [10] [11], apologized to Vasik Rajlich [12] and criticized the investigation process and the represented evidence. In November 2011, Ed Schröder announced his new web-sites [13] [14] that give an alternative view of the historic ICGA - RYBKA event that led to the ban of Rybka.