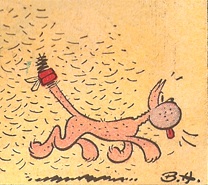 CookieCat,
an educational open source chess program by Steven Edwards designed for pedagogical purposes, written in Free Pascal [2]. CookieCat evolved from the earlier Bozochess project [3] announced in October 2011 [4], renamed in December 2011 [5], and first released in January 2012 [6] under the permissive BSD License. However, Steven's wish that his CookieCat should be easily searchable on the net without too many false positives didn't fulfill when Steven Universe came up with a fictional character [7] and ice cream [8] in 2013.

CookieCat utilizes bitboards as basic data structure to represent the board. Inside CookieCat's source code [9], there are three groups of routines named after some of Steven's feline companions. There are the Lucky positional evaluator routines, the Smokey mate finder routines, and the Spooky general search routines. The names were chosen not so much to be cute, but rather to make it easier for others to identify the program's functional organization [10]. CookieCat features five hash-tables, beside the main transposition table, an endgame tablebase cache, a pawn hash table, evaluation hash table, and a dedicated perft hash table, and can further probe an opening book [11] and Edwards' tablebases.

Bitboards are defined as union (variable structure) of four 16-bit words and one 64 bit value:

CookieCat's search dubbed Spooky is implemented as iterative search using a finite-state machine as nested procedure inside SpookyFindMove, which structure is outlined in following snippet: