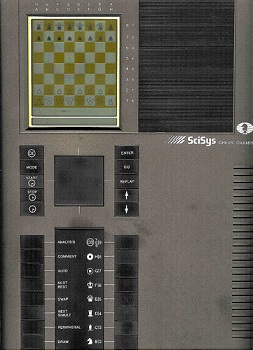 Chess Champion Mark V,
a dedicated chess computer manufactured by Scisys-W Ltd. Hong Kong from 1981. Primary author of a Z80 based development version was David Broughton, while the translation to the 6502 production version was done by Mark Taylor [2] . Both programmers were recruited into Levy's and O’Connell's company Philidor Software which was closely related to Winkler's Scisys-W Ltd. who manufactured and traded most of their computers until in summer 1981 Levy and O’Connell decided to loosen their relationship with SciSys and founded their new software company Intelligent Software [3] [4].

The Mark V had an LCD-board, a striking, futuristic design and many new features. For instance, it could play simultaneously on up to 12 internal boards.

The Chess Champion Mark V was mentioned to use the first version of the SEX Algorithm then called SX Algorithm , which used fractional plies for extensions and reductions [5] [6] :

While they started the first iteration of an ID framework with a SX-value of 10, which was incremented by 7 or 8 in further iterations, the depth decrement SXDEC was determined by static move properties, varying from 3 for the first check, to 7 for further tactical moves such as captures and attacking moves, up to 21, 24 or even 34 for non-tactical and apparently loosing moves. Those latter high decrements and reductions gave the Mark V the characteristic of a Shannon Type B program, which caused some tactical oversights with quiet moves involved, but made the program a strong mate solver for that time.