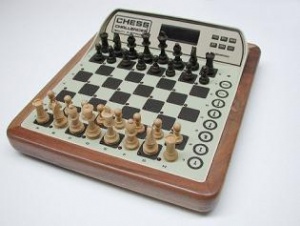 Chess Challenger, or Fidelity Chess Challenger,
was a series of dedicated chess computers produced and market by Fidelity Electronics. The Chess Challenger 1 was the first commercial chess computer of its kind in 1976, invented by Sidney Samole, with a program by Ron Nelson, developed for an Altair 8800 Microcomputer with an Intel 8080 CPU. Further versions of Nelson's program run on a more advanced Z80 CPU, great commercial success was the Chess Challenger 7 [2] in 1979. Ed English, an early game programmer affiliated with Fidelity Electronics in 1979/80, improved the alpha-beta implementation to double the playing speed [3]. 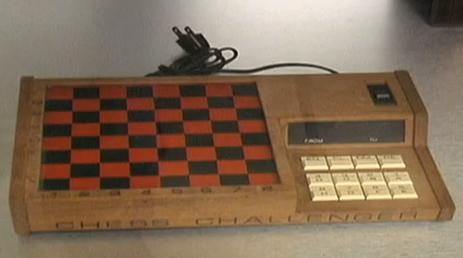 In 1980, when Dan and Kathe Spracklen started to collaborate with Samole, a 6502 Version of Chess Challenger was built for a Sargon III port. The 6502 was better suited for Sargon than Z80. Excerpt from their oral history how it went with Fidelity [5] :

The immediate success was the lucky win of the 1st World Microcomputer Chess Championship, September 4 to 9, 1980, in London. Chess Challenger with a 6502 CPU, notably winning last three of five rounds against three of four other Sargon incarnations! While the ICGA tournament site states a Z80A CPU [6], Kevin O’Connell reported the World Microcomputer Chess Champion was equipped with a MOS Technology processor, despite newest Fidelity computers were shipped with Z80/Z80A [7]. As further confirmed by Fidelity Electronics' Vice President Myron Samole in an Personal Computing interview, the Champion Sensory Challenger, which also won the MCC 1980 at September 5 to 7 in San Jose, California had a program written around the 6502 chip [8]. 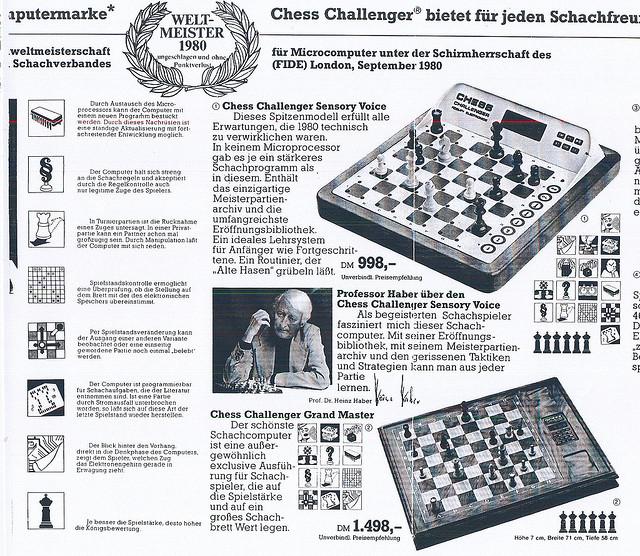 The strong third place at the ACM 1980 in October was again a great success, only losing to Belle in the last round [14]. Description given from the ACM booklet with mentioned authors Dan and Kathe Spracklen, Ronald Nelson, Frank Duason [15]

This marks the first appearance in an ACM tournament for this popular machine. Chess Challenger is written in assembly language for a 6502 microprocessor. It has 20k bytes of memory and executes about 1,000,000 inst/sec. A book of about 1,000 moves is used. The program uses the alpha-beta algorithm with iterative deepening.

Using the same name at almost the same time for programs with different authors and CPU architectures caused some confusion by potential customers, not to mention tournament organizers. Accordant to their product lineup and nomination, and caused by former tournament rules, permitting multiple, but different named entries from the same author, and commercial availability of participating computers, Fidelity Electronics somehow was "forced" to continue the naming obfuscation in further tournaments, where Fidelity computers with Spracklen programs participated as Fidelity X, Challenger-X, Elegance, Elite, Private Line, and Sensory.

In 1986, at the 17th ACM North American Computer Chess Championship, Fidelity showed up with a huge experimental, parallel machine, named Chess Challenger X. Authors were Ron Nelson, Dan Spracklen, Kathe Spracklen, and Danny Kopec as Book author. It had a Z80 controller, and 16 or more 68000 16-bit processors. The controller was written in C, the 16 or more Spracklen programs in assembler [16].

Chess Challenger X scored 50%, losing from Recom and Belle. Notably, in the same tournament, another Fidelity computer programmed by the Spracklens with a Kopec book took part, as Fidelity Experimental with a 68020 processor. It did not score better in that strong field and finally placed 10th.

At the ACM 1988, the new experimental version of a 68030 based micro called Chess Challenger X showed a remarkable performance. Mentioned authors from the tournament report by Monty Newborn and Danny Kopec [17] were Dan and Kathe Spracklen as well as Ron Nelson. The 32-bit program, written in 68030 assembly language, drew Deep Thought and won versus Waycool, the current World Champion Cray Blitz, and HiTech. Chess Challenger X was likely the forerunner of the commercial available Fidelity Elite Avant Garde V9 [18] . One year later, at the WCCC 1989 in Edmonton, a similar machine, presumably with a further developed program, played under the name Fidelity X and finished sixth.