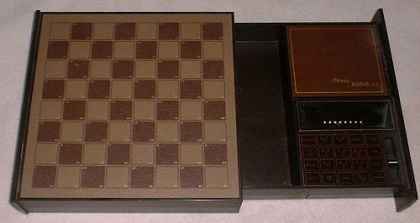 Chafitz Modular Game System (MGS),
a dedicated chess computer module system manufactured by Applied Concepts and distributed by Chafitz, otherwise identical in construction with the akin Great Game Machine. The MGS had exchangeable modules with programs from multiple authors, Sargon 2.5 by Dan and Kathe Spracklen, Boris 2.5 based on Sargon 2.5 improved by John Aker and Terry Fredrick, Morphy by John Aker, the opening module Gruenfeld by Larry Atkin, David Slate and John Jacobs, the endgame module Capablanca by Atkin and Slate, and the Steinitz module by Atkin, all 6502 based. There were also other game modules available, such as Checkers [2] , and the Othello program Odin by Peter W. Frey and Larry Atkin.

The Chafitz Modular Game System with the Sargon 2.5 program incorporated, participated at the First World Microcomputer Chess Championship 1980 in London, competing with four other Sargon incarnations and finished 7th of 15 with 2½ out of 5 [3], losing the last rounds from runner-up Boris Experimental and tournament winner Chess Challenger, both with Spracklen programs as well.