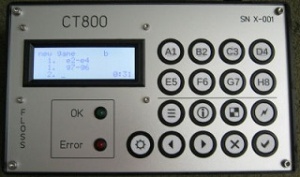 CT800,
a FLOSS dedicated chess computer designed by Rasmus Althoff. The CT800 features an ARM Cortex M4 microcontroller of an Olimex H405 board [2] that operates up to 168 Mhz, with 1 MiB of flash memory, 192+4 kiB of SRAM, and multiple I/O and USB connectors, with a 4x20 character text display, two leds, and a 4x4 + 1 keypad as peripherals aka user interface. Voltage source is due to four NiMH rechargeable AA batteries or external 5 V DC power supply. CT800's firmware is developed by Rasmus Althoff, released under the GPL Version 3, the chess playing software is an ARM adaption of George Georgopoulos' open source engine NG-play [3] including a KPK bitbase by Marcel van Kervinck [4] [5]. The program may be compiled to run on other platforms via UCI, such as Windows, Linux, Mac OS and Android computers, and Raspberry Pi systems like the DGT Pi.