Difference between revisions of "CHAOS" 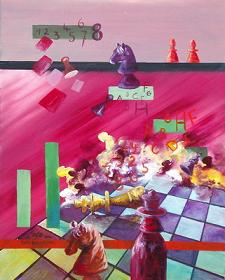 CHAOS was one of the leading programs since it first appeared at ACM 1973 until the mid 80s. CHAOS, which stands facetiously for Chess Heuristics And Other Stuff, has participated in twelve ACM tournaments [2] and four world championships [3] , runner up in 1974 behind Kaissa, defeating favorite Chess 4.0. In 1980 at the 3rd WCCC, CHAOS was close to becoming champion but lost the playoff against Belle. Its last tournament was the 16th AMC 1985 when it lost two games in a very strong field.

CHAOS started in the late 1960s at RCA Systems Programming division in Cinnaminson, NJ with Ira Ruben, Fred Swartz, Victor Berman, Joe Winograd, and William Toikka as first authors. In January 1972, Sperry Univac (1986 Unisys) officially took over the RCA Computer Systems Division and eventually moved everything to Blue Bell, Pennsylvania. Later the program has been affiliated with the Computing Center of the University of Michigan where most of its programmers were staff members [4] .

CHAOS was written in Fortran and required in excess of 3,000,000 words of memory to execute, using most of it for storing the tree. It examines only about 50 nodes/sec (1985 70 nodes/sec [5] ) or about 10,000 per move. The reason why CHAOS evaluated so slowly — their programmers did a better job of evaluation! Because every minimax decision is made based on a single evaluation, it seemed plausible that the more accurate this number is, the better the quality of tree searching. However, that comes at the cost of missing deep combinations from brute force search, but CHAOS's strength/nodes-evaluated ratio was impressive. The program carried out a selective search with iterative widening, a bit different from the others. Its book contains about 10,000 lines.

Duel on the Chessboard