Difference between revisions of "Boris" 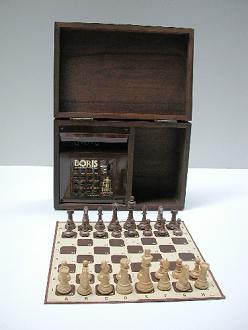 Boris,
an early dedicated chess computer, which appeared in February 1978, designed and manufactured by Applied Concepts [2] and marketed by primary distributor Chafitz. Already in March 1978, Boris played Second West Coast Computer Faire Microcomputer Chess Tournament in the "microcomputers with less than 8K of memory class" [3]. Boris ran on a Fairchild F8 8-bit microprocessor with only 2.5 KiB ROM and 256 byte RAM. David Lindsay was hired to program the machine [4], and two further Boris models with Lindsay programs appeared in 1979, the first travel chess computer Boris Diplomat [5] [6], where Lindsay holds a patent [7] on the Chess piece font [8], and the Boris Master [9].

The name of the computer was likely in dependence on the given name of Boris Spassky, who lost the Chess World Championship 1972 from Bobby Fischer in Reykjavik.

The ICGA site mentions Rex Kent as author of Boris Experimental which played the 1st World Microcomputer Chess Championship 1980 in London [14]. However, Boris X was already the work of Kathe and Dan Spracklen, and additionally with modifications by John Aker and Terry Fredrick. Rex Kent operated Boris at the PCW-MCC 1978 [15]. It is a bit unclear whether Kent was operator or co- or book-author of the early Boris otherwise credited to David Lindsay.

In 1979, following the development of the original Boris when more advanced programs were required, Arleen and Steve Chafitz contracted Kathe and Dan Spracklen to be their chess programmers for their Chafitz modular game system as well the Applied Concepts Great Game Machine [16]. Their Sargon 2.5 program appeared as Chafitz Sargon 2.5 MGS module [17], and in 1980, as Chafitz ARB Sargon 2.5 [18], also called Boris Sargon 2.5 [19] or simply dubbed Boris 2.5. John Aker and Terry Fredrick, affiliated with Applied Concepts, were involved in improving the Sargon and Boris program [20]. 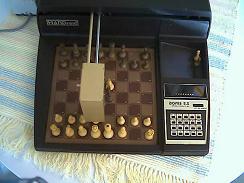 Boris Handroid was the first but very rare electronic chess robot from 1980 [22], with 64 Hall effect sensors to recognize pieces, and three servomechanisms to control the cartesian robotic arm. The Handroid program, adapted by Terry Fredrick [23] was also based on Sargon 2.5 by Kathe and Dan Spracklen.

Boris Experimental (Boris X) was the further development of the Boris 2.5 aka Sargon 2.5 program, but no longer by the Spracklens, who after their experience no longer worked for Chafitz, but for Samole's Fidelity Electronics. John Aker continued the job.

The Sargon based Boris Experimental played the 1st World Microcomputer Chess Championship, September 4-9, 1980, in London, where it only lost versus later champion and Sargon based Challenger X, blundering an endgame a piece up [24], and became second with 4 out of 5!

Boris X was also registered for the ACM 1980. A brief description is given in the tournament booklet with Applied Concepts CEO Alan Mead as representative [25] :

But Boris X, despite registered, finally did not play the ACM 1980. Kathe Spracklen had filed a protest, claiming Boris X is too similar to Sargon 2.5, and requested mutual comparison of the source code. After John Aker admitted that Boris X was a revamped Sargon 2.5, Boris was rejected [26] [27].

At the 12th ACM 1981, Boris X was mentioned in the booklet again, now with a long list of its authors and Applied Concepts representatives [28], but again, did not participate, likely also because David Slate was already competing with Nuchess: