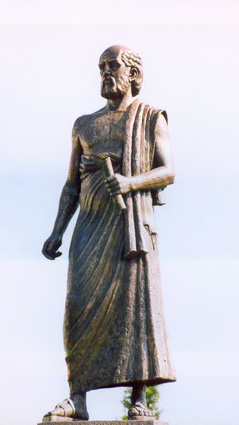 Aristarch,
a chess engine by Stefan Zipproth, compliant to the Chess Engine Communication Protocol as well as the Universal Chess Interface, running under Windows. The development of Aristarch already started in 1995 and was first written in Basic, version 2 was mainly a C port, but version 3 was a complete rewrite in C++, using a strictly object oriented design, utilizing bitboards to represent the board, and apparently rotated bitboards to generate sliding piece attacks. Version 4.0 includes several improvements, the most important being a completely new pawn evaluation routine [2], it otherwise has a rather speculative king safety evaluation. Beside commonly known search extensions and reductions, Version 4.21 introduced an original pruning method based on 8 simple conditions [3]. Aristarch played the CCT4 and CCT5 online tournaments.

The name of the engine has its origin in the ancient Greek astronomer and Mathematician Aristarchus of Samos (310 BCE - ca. 230 BCE) [4], who presented the first known model of Heliocentrism that placed the Sun at the center of the known universe with the Earth revolving around it. He calculated the sizes of the Sun and Moon, as well as their distances from the Earth in terms of Earth's radius.

On the Sizes and Distances (Aristarchus) from Wikipedia