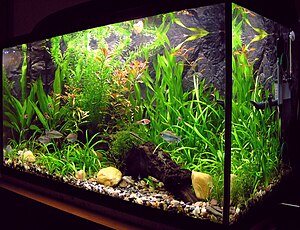 Aquarium with plants and tropical fish [1]

Aquarium,
a sophisticated, commercial Windows GUI by ChessOK, developed by Victor Zakharov and Vladimir Makhnychev [2], supporting UCI and WinBoard engines. Aquarium is based on the fluent design as introduced by Microsoft Office 2007, featuring a ribbon, which is a set of toolbars placed on tabs [3] [4]. Beside the ribbon, the main window is tiled by a navigation window with multiple panes to switch modes and documents, and a bigger working area with various views on that documents, that is game databases, generated game lists and move variation trees as result of database queries, and a single chess game, optional with variation trees and notations. In game playing or analyzing mode, the working area is dominated by a board view associated with dockable and stackable notation-, multiple column tree-, header-, analysis- and information windows. First released as aquarium for the fish dubbed Rybka, the Aquarium GUI is also bundled with Houdini [5]. 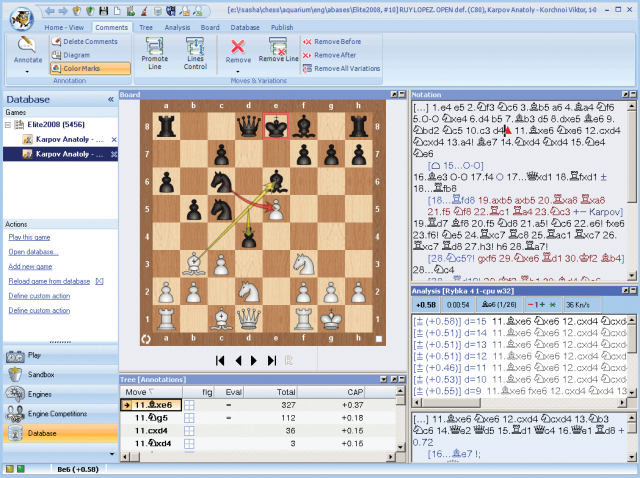 Aquarium has its own proprietary database format, and further supports the format of its stable mate Chess Assistant, Portable Game Notation and Extended Position Description. It can read, query and import ChessBase CBH-Format. Aquarium can probe Lomonosov Tablebases.

Aquarium features an Interactive Deep Analysis dubbed IDeA, using a permanent minimaxed analysis tree, the user can interactively explore and expand during of after analysis with various engines.