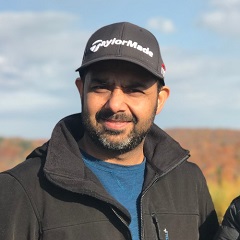 Mohammed Nasir Ali,
a Pakistani computer engineer, former Chief Technology Officer at the PAL Group of Companies, MBA in finance in 2010 from New York Institute of Technology, since 2011 active in the Toronto area, Ontario, Canada, affiliated with Equifax. He holds a B.Sc. in computer science from University of Karachi in 1999, where his research thesis was on the topic of parallel heuristics search applied to the problem of chess. Short later, along with four colleagues, Mohammed Nasir Ali founded Pal Computer Systems in Abu Dhabi, which finally evolved to the PAL Group of Companies. His interest in chess and computer chess led to his involvement in the Hydra project, where he served as its project manager from 2004 until 2008 [2].