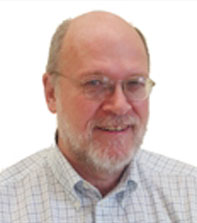 David Leigh Waltz, (May 28, 1943 – March 22, 2012)
was an American electrical engineer and significant contributor in several areas of artificial intelligence, president of the AAAI from 1997 to 1999, and director at Center for Computational Learning Systems, Columbia University. He held a Ph.D. on computer vision from Massachusetts Institute of Technology - his thesis originated the field of constraint propagation [2], and he further originated the field of memory-based reasoning branch of case-based reasoning [3]. His research interests include massively parallel information retrieval, data mining, and machine learning applications, especially to the electric power grid. As director of advanced information systems at Thinking Machines Corporation, where he worked from 1984 to 1993, he was involved in the StarTech project, and along with vice president John Mucci provided the managerial backing to allow Mark Bromley, Roger Frye, and Kurt Thearling to work on the massive parallel chess program with important design and programming help in getting StarTech running on the CM-5 [4].