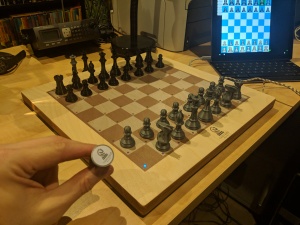 The Italian company Certabo manufactures and markets electronic chessboards with automatic pieces recognition to allow playing against strong chess engines on stylish traditional wooden boards. Unlike other electronic boards, Certabo boards do not necessarily come with their own, fixed pieces. Instead, a set of 34 identifying chips is provided, which can be attached to the bottom of pieces in any set. Although mostly intended for chess (32 pieces and 2 additional queens for promotion) [1] the board can also be used for 8x8 checkers (24 regular checkers and 10 kings for promotion) [2].

Although the company provides its own software [3], the open protocol encourages third party GUIs to support the board as well. Aart Bik's Chess for Android and Checkers for Android were the first Android GUIs [4] [5] to support Certabo boards for chess and 8x8 checkers, respectively.